Walk No 14 - From Ricmond, at the western end of the District Line,  to Boston Manor 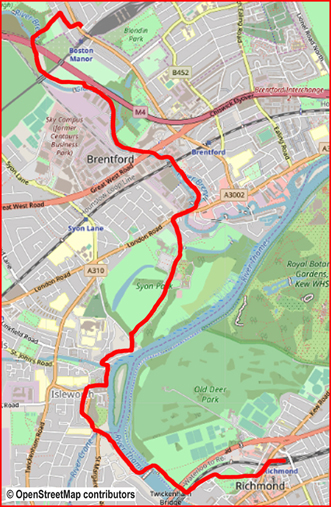 This is an easy walk which includes an attractive section of the River Thames.  It has plenty of refreshment stops.  As in walk 13 you start off by crossing the attractive Richmond Green and the Swan PH.  Upon reaching the Thames you turn right and cross the river at the 19thC Richmond Lock. There is 400m of road walking before you reach the attractive Isleworth riverfront with two more pubs. After this there is a pleasant walk through Syon Park passing a garden centre cafe before reaching Brentford and the Grand Union Canal.  Walk for 3Km up the canal and then swing right to reach Boston Manor Tube Station.

1. Cross the road at the pedestrian lights in front of Richmond Station and go ahead through an alleyway. Turn left and walk along a road called Little Green. Very soon, you will be able to see Richmond Green on your right. Take the diagonal path which cuts across the centre of the Green. Cross over a small road and continue in the same direction to the far corner of the Green. Enter Old Palace Lane and follow it down to the River Thames, passing the White Swan pub.

2. Turn right on the riverside path. Pass under two bridges and walk for 350m to Richmond Lock. Use the footbridge to cross the Thames. Continue along the opposite bank in the same direction as before. When you reach the end of the riverside path, swing left on a small road to reach a main road (St Margarets Road).

3. Turn right and walk for 400m, passing the sign for Isleworth. Where the main road turns left, turn right on Lion Wharf Road and walk down to the riverside. Turn left and pass between Town Wharf pub and the river. Where a small river (the River Crane) enters the Thames, you are obliged to turn inland and cross a bridge. Continue past another pub, The London Apprentice. You now have a good view of the river, with Isleworth Church on your left. Swing left with the road. Within 100m there is a gate on your right, signed Syon Park. Enter the park and walk ahead, close to its right-hand perimeter. After 300m there is a fine view of Syon House to your right.

4. You then arrive at Syon Park Garden Centre, which has a tea room and toilets. Continue ahead past a car park. The road narrows to become a broad footpath which swings left through gates to come out onto the A315 (London Road). Turn right here and walk 200m towards a bridge over the Grand Union Canal at Brentford.

5. Just before the bridge, cross the road and go down to the canal. There are signs indicating your route to Osterley and Hanwell. Follow the towpath past modern waterside developments. You will see the prominent offices of GlaxoSmithKline on the opposite bank ahead of you. You will also hear the traffic on the M4. Continue on the towpath to cross a footbridge bearing the logo of the Grand Central Canal Company 1820.

6. Continue on the towpath on the other side of the canal and pass under two more bridges. Immediately after the second bridge (which carries the M4), leave the canal and turn right, signposted to Boston Manor Station. Take the left-hand of two paths, beside a stretch of the River Brent. Climb the path and go ahead at the top of the hill to reach Southdown Avenue. Turn right and continue to the junction with Wellmeadow Road. Turn left here and then right on Boston Road to reach Boston Manor Station.

Richmond Lock is the  furthest downstream of all the locks on the River Thames and is the only one operated by the Port of London Authority. It permits passage of vessels up to 250 feet long.  The Richmond Lock and Weir Complex was opened in 1894 and is designed to maintain a navigable depth of water upstream of Richmond.  It was needed because when the old London Bridge was demolished in 1832, the removal of pallisades constructed to protect the bridge, resulted in the tides on the upper Thames rising and falling far more than they had done previously. As a consequence,  the river at Twickenham and Richmond was often little more than a stream running through mudbanks. Technically, Richmond Lock is a half-tide lock and barrage, which comprises three vertical steel sluice gates suspended from the footbridge structure. These gates weigh 32 tons each and are 66 feet in width and 12 feet in depth.  For about two hours each side of high tide the sluice gates are raised and river traffic can pass through unimpeded. For the rest of the tidal cycle the sluice gates are closed, and ships and boats must use the lock.

Richmond Lock Footbridge  The footbridge crosses the conventional lock and is an integral part of the barrage system. It connects Richmond on the east bank with the neighbouring district of St Margarets the west bank  but is closed at night to pedestrians at 19.30 in the winter and 21.30 when British Summer Time in in effect.

Syon House and Park, lie within within the parish of Islewoth in the county of Middlesex. It is the London residence of the Duke of Northumberland. Syon Park borders the Thames opposite Kew Gardensand contains a tidal meadow flooded twice each day by the river. The London Butterfly House was based in the grounds of Syon Park from 1981 until its closure on 28 October 2007 due to plans to build a hotel complex on the land. In 2011, the Syon Park Waldorf Astoria hotel opened on the site. The hotel was renamed to the Hilton London Syon Park in 2013