Walk 24 - From Walthamstow Central, at the Northern End of the Victoria Line to Tottenham Hale via Walthamstow Wetlands

PLEASE NOTE : Dogs are not permitted in Walthamstow Wetlands 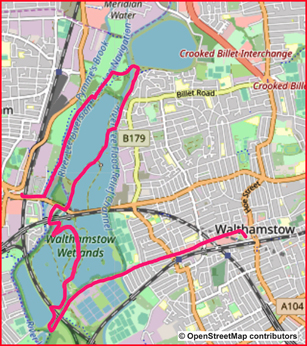 The walk starts by visiting one of the most colourful high streets in London.  Walthamstow High Street is home to a host of individually owned shops and market stalls with a wide ethnic mix.  Walking down this pedestrian area is a feast of sights and sounds.  After the High Street, the walk continues down Coppermill Lane which then becomes more scenic. However, it is not until roughly the 3Km mark that you enter Walthamstow Wetlands.  It is well worth the wait. The many reservoirs make walking an interesting project and there are wide views from horizon to horizon.   After a couple of kilometers you reach the visitor center which is housed in The Old Engine House with refreshments available.  After this you enter the second section of the Wetlands.  The reservoirs in this section are at two different levels and your walk takes you along the bank of the higher reservoir with more good views all around. Leaving the Wetlands, the walk goes north and then east to join up with the River Lea Navigation.  Turning south, a 2 Kilometer stretch of towpath walking brings you back to Tottenham Hale tube station.

1.  At the top of the escalator at Walthamstow Central Station, turn left up some steps, following the signs to Selborne Road. You come out into Walthamstow bus station. Turn left here and cross the road to an open green area. Turn half-right and walk across the green to Walthamstow High Street, which you can see ahead. Turn left and walk down the High Street. This is your direction of travel for the next 3 km. 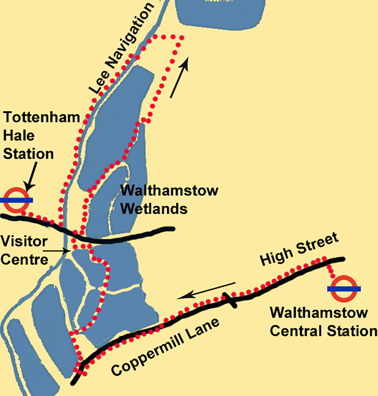 2.  Cross Willow Walk and later cross St James Street to enter Coppermill Lane.  After another 1 km the road narrows and the view opens out on both sides. You can see a reservoir on your right and a Thames Water treatment plant on your  left. Continue ahead for another 850m. After a bend in the road, turn right to enter Walthamstow Wetlands. Follow the path right and go past the Coppermill Tower. Continue for another 150m and then turn sharply right over a concrete bridge. At the end of the bridge, turn back left into an open space and look for a pathway going to the right. Go through a gate and swing left on an attractive path with water on both sides. Continue between the reservoirs for over 1 km until you come to a green fence with a railway line and road beyond.

3. Turn left on a track. You soon reach the Wetlands Visitor Centre, which has a café. Exit the visitor centre from the side opposite to  the one you came in by. Walk through a car park to reach Forest Road. The Ferry Boat Inn is straight ahead. Cross the road, turn right for 50m and then turn left to enter a second area of wetlands. Swing left with the pathway and continue for about 250m until the embankment of a reservoir appears on your left. Turn left and climb the steps up to the level of the reservoir. Turn right and walk alongside the water with good views all around. After 750m you meet a fence which crosses the path and runs down the bank on your right. Leave the path here and  go carefully down the grass bank beside the fence. There are no steps but the descent is not difficult.

4. At the bottom, go ahead on a path which turns left and then right to cross a bridge. This is where you leave the  Walthamstow Wetlands. Take a narrow pathway to the left and follow it with a watercourse on your left. When the path reaches a housing estate, follow a signpost ahead for the Lee Navigation.  At the next signpost, turn left towards Tottenham Marshes. After 200m you cross a bridge and arrive at a visitor information board welcoming you to the Lee Valley. Walk past the board and go slightly to the left on a path which crosses open grassland. Go over a green bridge and reach the towpath of the Lee Navigation.

5. Turn left and walk to a set of locks. Stay on the towpath as it crosses to the  opposite bank and continue in the same direction down the river for another kilometre to reach Forest Road (A503) at Tottenham Hale. Turn right to reach Tottenham Hale Underground Station (Victoria Line) and the adjacent mainline station with trains to Liverpool Street.

Walthamstow Wetlands  Is a nature reserve extending over 500 acres in north east London. It was created from the area known as Walthamstow Reservoirs managed and is owned and managed by Thames water.  It is particularly important for birds and wildfowl due to its position in the Lee Valley which is a green corridor through the heart of London.  It is one of the largest urban wetland nature reserves in Europe. Visitors can freely access the site’s natural, industrial and social heritage in one of the capital’s most densely populated urban areas. The project was made possible after the Heritage Lottery Fund provided £4 million in funding.

The Coppermill Tower or Building  is Grade II Listed and has undergone a number of alterations over the centuries, including the addition of an Italianate tower in 1864. The previous mill on the site has been mentioned several times throughout historical records. It was noted that in the 14th century, the mill was powered by the Coppermill Stream that diverted from the River Lee for use in grinding corn.

The River Lee (or Lea)    is a tributary of the River Thames which rises in the Chiltern Hills and runs for 90Km (56m) to enter the Thames at Bow Creek. The river is canalised for most of its length and historically has always been a major trading route. However, commercial traffic effectively ended in the 1980s and it is now recreational.