Walk 15  From Wimbledon, at the South-Western End of the District Line, to Kingston. 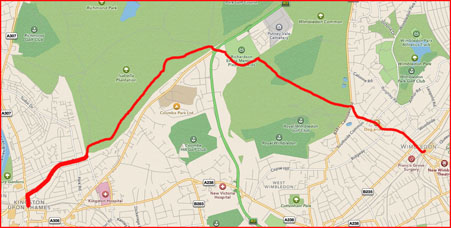 This walk explores Wimbledon Common and Richmond Park. After a gentle climb to Wimbledon Village, you set out across Wimbledon Common, an extensive area of woodland. The path cuts through the Common to Robin Hood Way (the A3), where you will find one of the main gates to Richmond Park. Once inside the park, you walk through attractive woodlands near the park’s perimeter and will hopefully see some of its 600 red and fallow deer. Kingston upon Thames is an ancient borough where Saxon kings were once crowned. It is now a lively retail centre with an attractive riverfront.

1. Wimbledon Station has two exits. To find the exit for this walk, turn right after climbing the steps from the platform and exit the station via the main concourse. Cross the road and turn right. Cross two junctions at the traffic lights. Follow the left-hand footway of Wimbledon Hill Road uphill for 1 km.  If you  prefer to avoid this part of the walk, you can catch the no. 93 bus from Stop R for two stops to Marryat Road, opposite the Rose & Crown Pub, and pick up the route at the war memorial. Otherwise, continue up the road, which brings you into Wimbledon Village with its many cafés, shops and pubs. 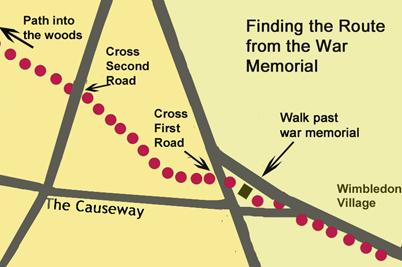 2. At the first roundabout, the road swings to the right. At the second round-about, it swings to the left.  Continue to the end of the village, using the left-hand footway. Wimbledon Common is now on your left and ahead of you is a war memorial in a triangle of land between roads. Walk right up to the memorial and then go around it to continue in the same direction. After a few steps, cross a small road and go ahead on a sandy track (may be very muddy after rain) which bends to the right.  Follow this track for 140m to reach another road. Cross  the road and continue on the track directly opposite, which takes you straight ahead into the woods. The track is divided here into a bridleway on the right and a footpath on the left.

3. Ignore all turnings to the left and right, including a wide path after 500m, which  cuts diagonally across your path.  300m after the diagonal crossing path, you reach another major crossing track.  Go straight ahead here and ahead again at the next crossing track after a further 200m. You continue ahead for 700m, ignoring all paths to the left and the right, until you reach a fork. Take the right-hand fork to pass a golf green on your right and a bench on your left.

4. The path starts to descend. Continue ahead and after another 500m follow a dog-leg right and left to carry on in the same direction. A large open space, which contains playing fields, is now visible through the trees on your right. Follow the path at across a brick bridge and walk towards a busy road to reach the A3 at a roundabout.

5. Cross at the traffic lights and go ahead to enter Richmond Park through the Robin Hood Gate. As you enter the park there is a car park on your right and a vehicle roundabout ahead (beyond which there is usually a refreshment kiosk). 40m before reaching the round-about, turn left on a clear path among the trees and bracken. You are now walking in a broad corridor of parkland between the boundary wall of the park on your left and a road on your right. Continue for 3 km on this path to reach the Kingston Gate of Richmond Park.

6. Leave the park and turn right onto Kings Road. After 500m the road swings right. At this point, turn left into Acre Road and follow it for another 700m to reach a main road. Turn left here and walk 250m to reach Kingston Station, with mainline trains to London Waterloo.

Information on Things You will See

Wimbledon is an area of London 12Km (7 miles) south-west of Charing Cross in the London Borough of Merton. The area is split into two sections known as the "village" on higher ground near the Common and the "town" centred on the railway station which was opened in 1838.  Wimbledon is the home of the world famous tennis championships which are held during the first two weeks of July every year.

Wimbledon Common is a large open space of forest and heathland totaling about 1,150 acres.  It comprises three area : Wimbledon Common, Putney Heath and Putney Lower Common. It is protected from being enclosed or built upon by an act of parliament which was passed in 1871.  It is a site of Special Scientic Interest. The common is maintained  for the benefit of the general public for informal recreation, and for the preservation of natural flora and fauna. It is the notional home of the Wombles who were created by Elizabeth Beresford and had their own TV show and pop group.  It was also one of the locations in H.G. Wells The War of the Worlds.

Richmond Park, was created by Charles I in the 17th century as a deer park. At 2,360 acres it is the largest of London's Royal Parks and is of national and international importance for wildlife conservation.  It is a place of many walkers, cyclists and horse riders and is home to roughly 630 red and fallow deer which roam freely through the park. Richmond Park is a top UK site for ancient trees, particularly oaks, which have historic and wildlife importance.