Walk No 23 – from Harrow & Wealdstone, at the northern end of the Bakerloo Line, to Stanmore 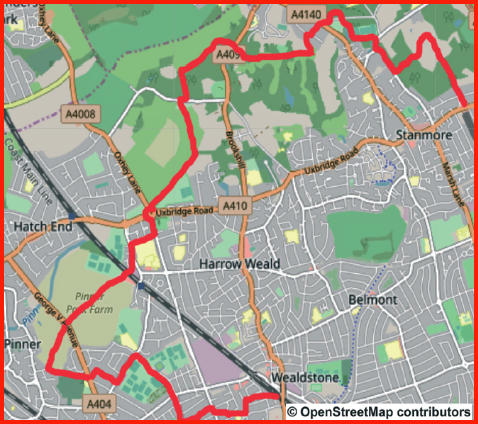 The first half of this walk involves a number of suburban roads but the second half is entirely "green" with a nice mixture of fields, woods and parkland culminating in a visit to one of he highest viewpoints in London.  Be prepared for mud underfoot especially in winter.  Harrow Museum and the Moat Visitor Centre is the first real point of interest but this is soon followed by a lovely long distance view of the route ahead.  At Old Redding the walk joins the London Loop and follows it to Bentley Priory and Stanmore Country Park.  Walking is mostly easy with a couple of steady climbs and a final ascent of Stanmore Hill.

1. At Harrow & Wealdstone Station  take the exit at platform level from Platform 1. Walk across a car park, turn right, away from the town centre, and follow the road left into Kings Way. Walk to the end, turn left into Queens Walk and then right into Marlborough Hill. In 200m, just after Marlborough Primary School, turn right into a passageway between houses. Go across Walton Drive and continue along a passageway to Harley Crescent, where you turn left. At the next junction turn right onto Harrow View and then go immediately left onto Hide Road. 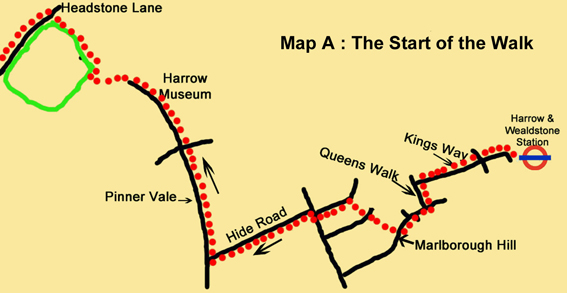 2. Follow this road until it reaches a T-junction, with a church on your left. Turn right on Pinner Vale and walk downhill to a main road.  Cross at the pedestrian crossing and go straight ahead along the continuation of Pinner Vale to reach Harrow Museum and Heritage Centre. On your left is the Moat Café Visitor Centre (closed  Mondays). Walk past the visitor centre and enter a park. Turn right and follow a broad path out to the main road (Headstone Lane). Turn left, cross the road and walk for 400m to take the third road on the right, Elmcroft Crescent. Follow this as it turns left and arrives at George V Avenue. Cross over and enter a footpath signposted to Pinner Village. Follow the path for 250m to meet Wakehams Hill and go ahead for another 250m to find a path on your right, signed Footpath 53. As you join this footpath, there is a broad view of your route ahead, across the valley towards Stanmore Hill. The path then descends between fields for 550m and meets George V Avenue again. 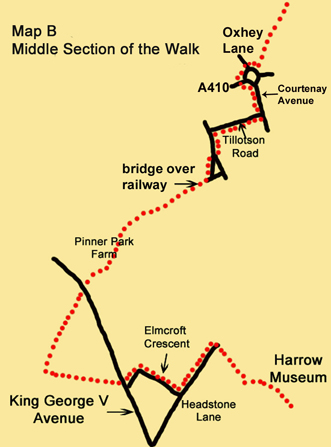 3. Cross over and continue ahead on a bridleway past Pinner Park Farm. Walk for another 500m between fields to reach a narrow lane. Cross the lane into the small footpath opposite, between a gated drive and a metal fence. After 100m the path leads to a footbridge over a railway line.  Cross the bridge and turn into Letchford Terrace, the second road on the left. You reach a main road (Headstone Lane). Turn left here, take the first road on the right (Tillotson Road) and walk to the end to meet Courtenay Avenue, another main road. Turn left along the left-hand footway and walk to a roundabout. Your onward path starts from the opposite side. To reach it, go left to cross the A410 at the pedestrian lights, then cross Oxhey Lane (the A4008). Continue clockwise round the roundabout, but before reaching the next exit, turn left into an enclosed path and walk uphill.  After 550m you come to a wooden fence across the path. Go left for a few steps around the fence to enter a field and continue along the right-hand edge of the field for another 500m. You eventually come out onto an unsurfaced lane between houses. Turn left for 20m and then turn right to follow the lane out to a road beside a pub (The Case is Altered). Turn right, then after 50m go left to cross the road and follow a London Loop waymark into woods.

4. Arrive at a junction of paths with houses ahead. Do not turn right here but continue ahead to reach a lane beside the houses. Turn right along the lane and where it finishes at the last house, go ahead on a footpath, with the edge of the wood on your left, and follow a series of yellow waymarks to Bentley Priory. Continue over a number of footbridges and boardwalks, looking out for a post indicating where your route turns right. Turn right, and follow the path for 200m to go up some steps and reach a road. Cross to a gate directly opposite and enter the  Bentley Priory Nature Reserve.

5. Walk on for 300m and go through another gate. Turn left and walk along a paved footpath for 750m to a junction of paths, signposted Stanmore Hill to the left and Stanmore Church to the right. This is point A where you can shorten the walk – see directions at the end.

6. To continue, turn left and go through a gate to leave the grounds of Bentley Priory. Follow a track out to a road lined with large houses and turn right. After 100m turn left along Priory Drive. Cross the A4140 to enter Warren Lane. Walk for about 100m until you see a car park on the left. Enter the car park and go to the far right-hand corner. Follow the London Loop signs into the woods, along a narrow path which twists and turns before joining Warren Lane again. Take the path opposite, following the London Loop signs, which lead you between several ponds. Turn left behind some houses, with a wooden fence on your right. Reach a grassy area in front of some cottages. Walk to the bottom left-hand corner of the grassy area and turn left into the woods towards a large pond with a low fence. Walk with the pond on your right and reach a road. Cross the road and turn right, walk for 100m and turn left onto Dennis Lane.

7. Walk downhill for about 250m and turn left through a gate (with a London Loop waymark) into Stanmore Country Park. Go ahead for 100m to reach a grassy clearing. At this point, you leave the London Loop. Turn left, as indicated by a Nature Trail (NT) signpost. Pass  Post 9 to follow a path downhill through trees. At Post 10 you carry on downhill. When you reach Post 11, leave the nature trail, go ahead, cross a bridge and emerge from the woods to climb some steps up a grassy bank. Take the left-hand path uphill to climb to the top of Stanmore Hill, ignoring any turnings left or right. When you reach the summit with its benches and a panorama board, take some time to admire the views across London. Your onward path is downhill to the left as you face the panorama board. At a fork, take the right-hand path, which swings right and begins to contour along the hillside. Look out for a fence with wooden posts below you and to the left. Take a narrow path which leads down to the corner of the fence and follow it around the fence corner to reach a large post with waymarks. From here your route is ahead (south) downhill.  Pass a bench and go through a gate into the woods. Continue downhill for about 300m in this direction and then leave Stanmore Country Park through a gate. Walk down Kerry Avenue to reach Stanmore Station.

To shorten the walk from Point A

Turn right towards Stanmore Church. Follow this well-surfaced path for 1 km,  past a deer park. When you reach some open land, continue ahead and leave the park to go down Old Lodge Way, the residential road directly ahead of you. Follow this road to the T-junction with the A410 (Uxbridge Road). Turn left and walk 1.5 km to Stanmore Station via the town centre or take the H12 bus

Harrow Museum known as Headstone Manor & Museum, is the local history museum for the Borough of Harrow.  It was established in 1986 and consists of four historic buildings.  The Manor House  is one of the earliest surviving timber framed building in London.  Built in 1310, it is surrounded by the only surviving filled moat in Middlesex.  The moat is as old as the oldest part of the building, and was probably constructed as a status symbol to reflect the wealth of the Manor’s owner. Other buildings on the site are The Great Barn, The Small Barn and The Granary.

Stanmore Hill is one the highest viewpoints in London rising to 152m (500feet) On a clear day you will see for 20 miles and the view easily takes in such landmarks as Canary Wharf, The Shard. The Gherkin and Wembley Stadium.

The London Loop is a 240Km (150mile) long distance circular path around London which runs mostly within the M25 Motorway.  Its 24 sections make maximum use of London’s open spaces and parks.